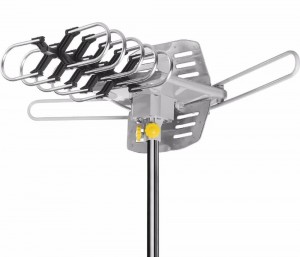 The antenna is a very important element of radio systems.

If the antenna is not exactly the right length for the frequency used, the radio waves cannot be transmitted or received efficiently. It shouldn’t be too long or too short. A good transmit antenna can also be a good receive antenna, and in many cases, an antenna is used for both functions.

If radio modules are supplied with an antenna, this is an efficient antenna and in some cases, the antenna cannot be replaced by another due to legal requirements.

However, if you develop a device with your own antenna or if you use a module for reception only, you have the option of using a gain antenna (a gain antenna). You then have to deal more closely with questions about antennas.

Basics of antennas are described here.

How an Antenna works

If you e.g. B. use a frequency of 433 MHz, the wavelength is about 70 cm, so an antenna with a length of about 35 cm would be most efficient. The transmitter must transmit radio waves with limited power, and the receiver must be able to intercept the transmitted radio waves efficiently.

The devices are becoming more and more compact, and therefore antennas with ¼ (λ / 4) of the wavelength are often used. The concept of quarter-wave antennas corresponds to that of half-wave dipole antennas.

However, the function of one side is transferred to the ground and the antenna length is halved, resulting in a quarter-wave antenna. That is why earthing is very important. This mechanism is used for the whip antennas of radio modules, cell phones, etc., with the housing taking on the function of the earth.

It is the range of frequencies in which an antenna can operate complying with reciprocity and in which the system is in resonance.

The units of bandwidth are Hertz (Hz) and it is the number for which the standing wave ratio is less than 2: 1 (in this notation maximum amplitude: minimum amplitude).

In order to eliminate the dependence of the bandwidth with respect to the central frequency, in some cases, it is expressed in percentages allowing a dimensionless value.

It is the load in ohms that the antenna represents for the system. According to the theorem of maximum power transfer, it is necessary that the antenna, the transmission line, and the generator have the same load, thus ensuring that the greatest possible power is emitted towards the medium.

A common number in the impedance of the antennas is 50 ?. However, if for any reason any of the impedances is different, it is necessary to perform an impedance coupling system that allows the aforementioned condition to be met. This difference is called a maladaptation.

These values ​​are a function of the frequency to which the device is subjected, and it is in the working frequency where the imaginary part is equal to zero, there is no energy storage and the behavior is only resistive. This value is what manufacturers deliver as impedance.

Like directivity, the gain is a dimensionless amount that is normally compared to an isotropic antenna. Because energy must be conserved, when one antenna radiates more power in one direction, power is being lost in another, for this reason, a comparison can be made with an isotropic antenna that has the same total power and measures the gain in one direction. specific address It is common for the gain to be expressed in the direction of maximum spread. The decibels are then used to express the gain on a logarithmic scale and i is added at the end when the comparison antenna is anisotropic (dBi).

The directive gain is “a measure of the concentration of the radiated power in a particular direction” [3].

The formula for directive gain in dbi is:

It is the ability to transmit or receive an antenna in a specific direction, usually that of maximum radiation.

Although it is not physically possible to generate this antenna it is a good theoretical reference for this type of comparison. Directivity (D) is then defined as the ratio between the maximum radiation intensity of the antenna with respect to an isotropic antenna of the same total power.

It is a different way of expressing the mismatch, it is a relationship that expresses the ratio between the power reflected by the antenna and that delivered by the transmission line with which it was fed. Its units are dB and it is related to the Standing Wave Ratio (ROE or SWR) by the following equation.

A large return loss represents a malfunction of the antenna.

The directional pattern of antennas

Directional antennas are used in cases where the communication partner is in the same direction. In this way, unwanted radio wave emissions into the environment can be avoided and no noise from other directions is picked up. Since low power transmissions are possible, this also has practical advantages. Radio waves emitted in a certain direction are referred to as directional beams.

Main lobe, side lobe and back lobe

The directional diagram of the Yagi-Uda antenna shows that a man and a back lobe form. The ratio of the main lobe to the back lobe, the damping, is calculated to indicate the directional factor of the antenna, which is given in decibels (dB). The larger this value, the better the performance of the antenna.

Since the field strength is indicated in the directional diagram, 20 logs is used for the calculation.

When choosing an antenna for the wooded area or mountain, directionality and gain are important factors. In addition, depending on the specification, the gain can be given in dBd, dB, or dBi; The decision for a particular antenna is therefore often difficult.
Since the antenna is made entirely of metal and there is no circuit for electrical amplification, the fact that there is talk of a win can also seem a bit strange.

Antennas can concentrate input energy in a certain direction, but there are differences in the type of concentration for different antennas. In other words, antennas that extend the input power in directions other than the location of the communication partner and directional antennas that efficiently concentrate this power have a different range. This difference is the difference in profit, and the higher the profit, the sharper the directivity. At the same time, this means that alignment is becoming more difficult.

The antenna gain is expressed as “the ratio of the received power in the maximum electrical field direction of a test antenna and a reference antenna with the same input power”. There are two methods of reporting antenna gain; one uses an isotropic antenna as a reference, the other uses a different type of satellite dish (usually a half-wave dipole antenna).

This means that the following applies to the ratio of dBd and dBi: 0 dBd = 2.14 dBi.
If 2.14 dBi is specified in the technical data of an antenna, this means that it is equivalent to an ideal half-wave dipole.

* In terms of antenna gain, dBd and dB mean the same thing, with dBd being the formally correct name. * Isotropic antennas are theoretical, formula-like, virtual antennas that emit radio waves in all directions with the same strength and have a spherical directional characteristic.

The radio waves emitted by vertically standing antennas spread in the vertical direction in relation to the ground and are therefore called vertical waves. Similarly, in the case of antennas placed horizontally, the electrical field has a horizontal orientation in relation to the ground, so that these waves are referred to as horizontal waves. Circularly polarized waves are also used, e.g. B. for satellite transmissions. The loss in reception is naturally very high if the polarization planes of the two antennas do not match. 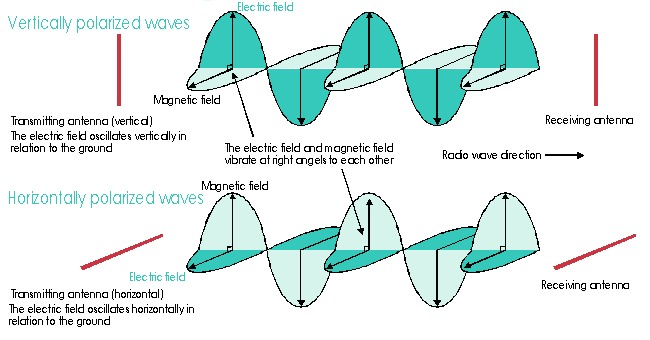 Since the high-frequency current flows through antennas, these are necessarily made of metal. Metals with low resistivity are preferably used as the material for antennas. While silver and gold are not appropriate for cost reasons, steel is susceptible to corrosion and heavy and is therefore unsuitable for antennas. Aluminum is commonly used for antennas because it has low resistivity and is inexpensive. It is often used for relatively large antennas.
For compact devices such as mobile phones and radio modules, antennas made of shape memory alloys (e.g. titanium-nickel alloys), stainless steel, or dielectric antennas are used. Simple antennas can even consist of piano wire.

This is how antennas are used

* Antennas should be attached to the outside of the product, if possible at the top.
* The TV antenna should be installed correctly so that it is as far away from the human body as possible. It should be noted that radio waves above 750 MHz are particularly well absorbed by the human body. For devices that are worn on the human body, a distance of at least 2 to 3 cm should be planned. * The housing in which the radio module is located should be made of ABS plastic. If a metal case that attenuates radio waves is used, only the main unit of the radio module should be installed; the antenna should be on the outside. You should also ensure that the module housing and the metal housing have the same electrical potential.
* The antenna should be as straight as possible and should not be bent into a circle.
* Make sure that the polarization planes of the radio waves match for both antennas.
* If the antenna is on the outside, you must use a coaxial cable and perform impedance matching.

When the antenna of a mobile phone is pulled out, it serves as a quarter-wave rod antenna; when inserted, the winding forms a spiral antenna in the tip. Compared to the rod antenna, the sensitivity of this spiral antenna is lower, so cell phones with the antenna pulled out are used. An F-type antenna, which is used only for reception, is built into the inside of the phone, and the inner and outer antennas use space diversity for the reception, with internal functions for power control, etc. applied to the signal. Since it is a mobile application, the directional characteristic is non-directional.
The frequency of the radio waves from mobile phones is (in Japan) starting at 800 MHz and incoming 900 MHz. When calculating the antenna length (except a spiral antenna) with an average frequency of 850 MHz, the wavelength l with 850 MHz is:

This results in a quarter-wave antenna of approximately 9 cm in length.

How cell phones are used efficiently
For the reasons described above, you should have no problems with the following recommendations for the use of cell phones and achieve high-quality voice and data communication.

* Extend the antenna fully when using the phone and make sure that it is not covered.
* Since the internal antenna is at the top of the phone, you should hold the phone at the bottom.
* Try to keep the antenna as far away from your body as possible.
* If the signal is obviously weak, you may be able to improve by turning around or changing locations.
* Use an antenna of adequate length. Do not manipulate or replace the antenna.
* Do not use loops or other metal accessories.
* Make sure the antenna is aligned vertically.
* We do not recommend antennas with flashing lights.